History and Background of Space4Women

Reports on the status of gender equality indicate that there is much work to be done. Globally, despite great progress in some countries, a limited progress has been achieved overall. What remains problematic is not only the current status, but also the considerably slow pace at which the situation is changing. According to the World Economic Forum and its 2020 Global Gender Gap Report , which considered over 190 countries for inclusion, equality, empowerment and gender parity will not be attained for almost 100 years.

Unfortunately, STEM fields and space industry are no exception, with regards to both education and careers. Globally, women represent only around 30 percent of the STEM researchers, and even lower figures have been communicated over the years for women in the space workforce, with very insignificant changes in the last two to three decades.

The international community recognizes gender equality as an issue of utmost importance, underlined by the fact that in 2000, one of the United Nations’ Millennium Development Goals (MDGs) was devoted to “promoting gender equality and empowering women”. Subsequently, in the year 2015, the adoption of the 2030 Agenda for Sustainable Development and its 17 Goals (SDGs) also gave prominence to the issue with SDG 5 devoted to “Gender Equality”.

The United Nations entities, including the Office for Outer Space Affairs (UNOOSA), has for decades advocated for and worked on the empowerment of women and girls to achieve gender parity. Not only can women realize the benefits from studying and working in science and technology, their efforts can also help achieve the SDGs. Female parity in STEM area, unfortunately, is not a given, but remains an unmet goal in all corners of the world.

UNOOSA, as the only entity in the system fully devoted to space affairs, recognizes the benefits of space to humankind and is committed to ensuring that women and girls play an active and equal role in space science, technology, innovation and exploration.

In 1999, the third United Nations Conference on the Exploration and Peaceful Uses of Outer Space (UNISPACE III) was organized in Vienna, bringing together hundreds of space professionals, diplomats, representatives from academia and the third sector, students and young space enthusiasts. The two-week conference was convened to generate and share ideas about how to pursue novel opportunities related to the theme: “Space Benefits for Humanity in the 21st Century”.

One of the outcomes of the Conference was the adoption of the Vienna Declaration on Space and Human Development, a document reflecting the nuclei of the deliberations and containing a wide range of provisions for the benefit of everyone that the international community agreed to work on in the 21st century. Among the provisions is enhanced capacity-building and educational programmes for children and youth, especially females, and creation of a mechanism for facilitating participation of young people, especially young women, in space-related activities.

In 2016, in the period leading towards the fiftieth anniversary of the United Nations Conference on the Exploration and Peaceful Uses of Outer Space (UNISPACE+50), the Committee on the Peaceful Uses of Outer Space (COPUOS) identified and endorsed 7 thematic priorities (TPs), including TP 7: “capacity-building for the twenty-first century”. Among the primary aims of TP 7 were defining innovative approaches to capacity-building and outreach activities and promoting efforts to encourage STEM education, with special focus on women in developing nations.

Building on the provisions and recommendations developed and agreed by the international community in the years since UNISPACE III, UNOOSA embarked upon a journey to develop a dedicated Space for Women Project as a means to address the needs of women in developing countries.

As the initial step in identifying the way forward, UNOOSA joined forces with UN Women to organize a Space for Women Expert Meeting in New York in 2017 as a great opportunity to share ideas and expertise regarding space and women, to nourish partnerships and forge new ones, to strengthen and deliver targeted capacity-building and technical advisory activities, and to promote global efforts to encourage women and girls’ involvement in STEM. A primary aim of the meeting was to discuss the scope and goals of a “Space for women” project and make recommendations for that project.

The Expert Meeting brought together dozens of participants from various fields and resulted in a set of recommendations for the development of a dedicated project. Awareness-raising about the importance of STEM was identified as one of the key areas of focus, since increased visibility of STEM opportunities may help motivate more women and girls to pursue certain fields in science and technology that, in turn, may bring benefits to the greater society. Participants also emphasized the importance of role models and the need for encouragement and empowerment in the space sector, and they advocated strongly for the creation of a mentoring network to facilitate awareness raising, coaching, networking and inspiration to pursue STEM careers and education. The need for an online platform for role models and mentors to promote such careers and education opportunities was as well among the recommendations.

Resulting from the great networking opportunity that the Expert Meeting represented, a self-organized Space for Women Group continued to work alongside UNOOSA in empowering and advancing the participation of young girls and women in the space sector around the world. This informal network made significant use of online platforms to communicate and collaborate on research and scholarship, to initiate and organize specifically focused interest groups, to plan and host events, and to share professional accomplishments within the network. Among the high-profile efforts of this group was a film presentation and panel discussion about futures for women in space at the 2018 UNISPACE + 50 event in Vienna.

The development of “Space4Women” has endeavoured to establish a leading platform for gender equality in the space sector, which is a firm priority of UNOOSA, and which must be seen in close coordination with other core priorities of the Office. The Space for Women Project helps bridge the gender gap and currently is one of the flagship programmes falling under the capacity-builder role of UNOOSA.

During the process of project development, UNOOSA has taken into consideration the discussions and recommendations from the Expert Meeting in New York, with emphasis on the importance of promoting gender equality in space sectors worldwide, and on helping communicate and facilitate access to opportunities in STEM education and the space sector itself.

The Project as it currently stands is split into four streams covering the full realm of the aforementioned activities. On 11 February 2020, on the international Day of Women and Girls in Science, the official Space 4 Women website was launched at a dedicated event during the Scientific and Technical Subcommittee of COPUOS. The website serves as a hub to centralize all the different but interconnected streams falling under the project.

With the activities above, Space4Women aims to address SDGs 4 and 5 by strengthening the awareness, capacity, and skills of individuals and institutions to promote gender equality and women's empowerment in STEM fields, with a special focus on the space sector. The vision of the Office for Outer Space Affairs is to bring the benefits of space to humankind, and to help ensure that the potential of space is fully realized in its capacity to promote peaceful and sustainable economic and social development. The Office for Outer Space Affairs is committed to ensuring that those benefits reach women and girls, and that women and girls play an active and equal role in space science, technology, innovation and exploration.Through Space4Women, UNOOSA works to bring the benefits of space science and technology to everyone - of all genders - everywhere. 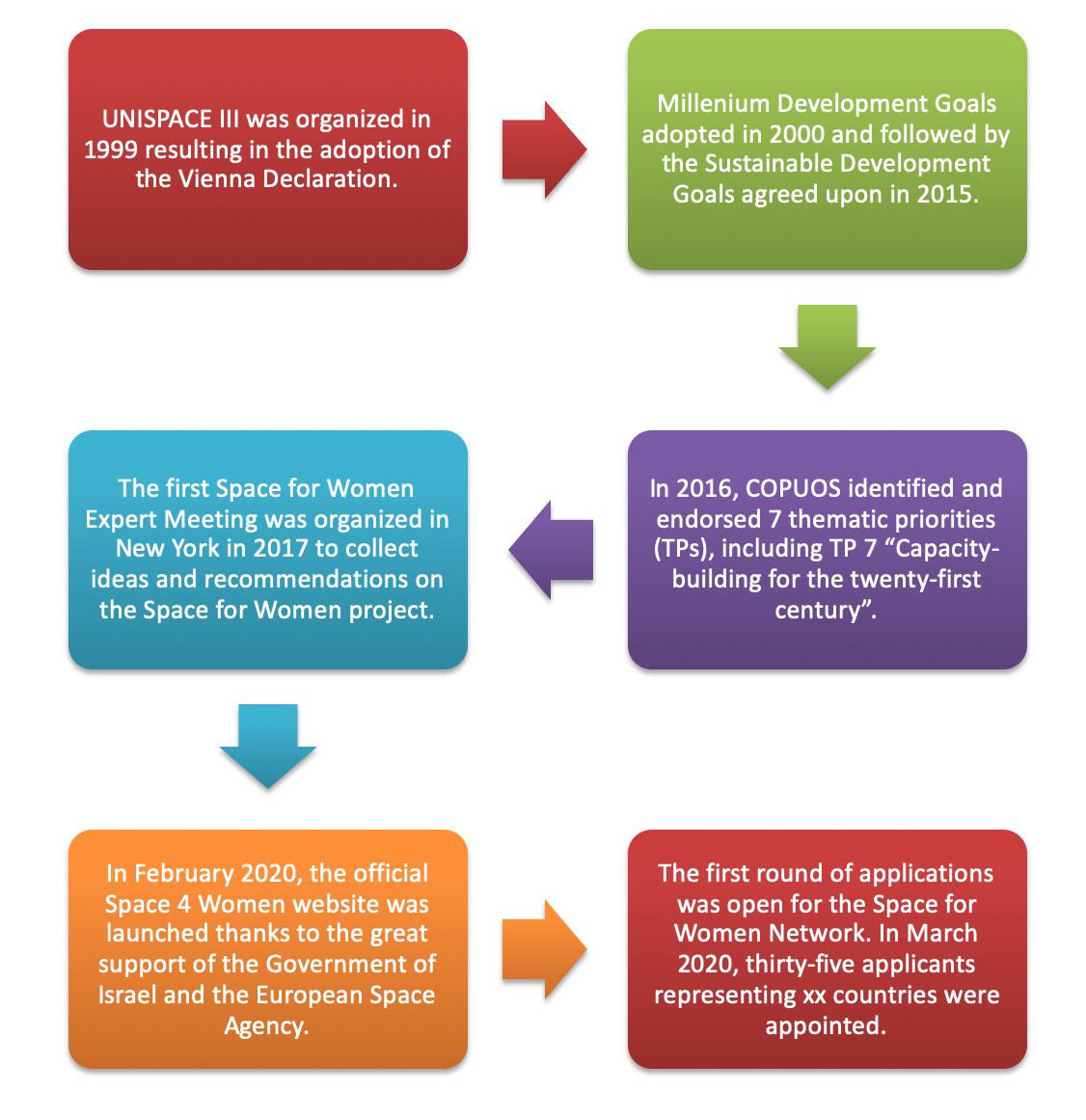