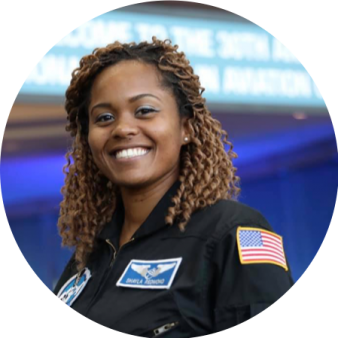 Profile:     Shayla Redmond is currently an Engineer at Mercer Research Center in Georgia where she works on various aerospace contracts in support of sustainment and innovation. She enjoys dancing, singing, martial arts, and weightlifting during her free time.

She received her Bachelor of Science degrees in Aerospace Engineering and Physics from Tuskegee University in May 2011 and a Master’s of Science Degree in Systems Engineering with a concentration in Space Systems from the Air Force Institute of Technology in September 2016. She completed her thesis on “Conceptual Architecture System to Measure the Effects of Subauroral Polarization Streams on Radar Operations”.

She joined Project Polar Suborbital Science in the Upper Mesosphere (PoSSUM) in fall 2017 where she is able to take part in citizen science research and suborbital training. Though she has not been to space, she looks forward to continuing her knowledge in the research and testing field of the upper atmosphere and beyond, furthering her career as an aspiring astronaut.

Network Activities:    Shayla’s plans as part of the network are to host/ present at least 4 science events this year. She is also currently a PoSSUM 13 ambassador – part of this role is to mentor girls to participate in a competition where they have to hold a leadership role during the process of their research.