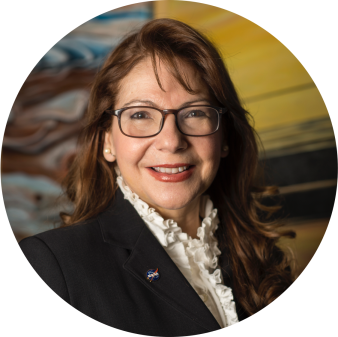 Profile: Adriana Ocampo is a Colombian planetary geologist and a Science Program Manager at NASA Headquarters. She holds a master’s degree in Sciences from California State University, Northridge and a PhD from Vrije Universiteit, Netherlands. She worked at the Jet Propulsion Laboratory, where she served as science coordinator for planetary missions (Viking, Mars Observer, Voyager, Galileo, etc.). She was the first to recognize, using satellite images, that a ring of cenotes or sinkholes, is the only surface impression of the buried Chicxulub crater. Ocampo led research expeditions to the Chicxulub site and to Belize K/Pg ejecta sites, which she discovered. In 2017, she and her team reported a possible crater near Cali, Colombia. She is lead Program Executive for NASA's New Frontiers Program and Program Executive of the Discovery Program Lucy mission. Ocampo was the Program Executive of the Juno mission to Jupiter Juno Mission and New Horizons mission to Pluto and the Kuiper Belt. She received the Woman of the Year in Science award from the Comisión Femenil in 1992. In 2002, she was named one of the most important women in science by the Discover magazine. To commemorate her contributions to space exploration, an asteroid was named after her.