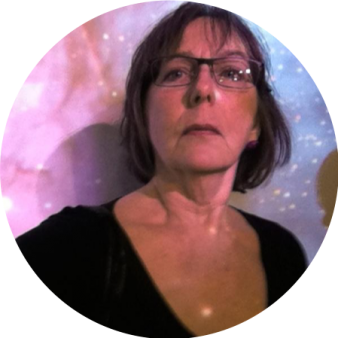 Profile:     Jan Millsapps, Ph.D., Professor Emeritus of Cinema at San Francisco State University, is a veteran filmmaker, a pioneering figure in new media, an early web innovator, and a versatile and accomplished writer whose creative work and professional activities demonstrate an ongoing commitment to finding and telling women’s stories, especially those related to science and technology, and in improving the status of women individually and globally. She has produced groundbreaking films, videos, and interactive cinema, has been a featured blogger on Huffington Post and Thrive Global, and has written two space-themed novels. Her documentary, Madame Mars: Women and the Quest for Worlds Beyond, screened at the United Nations in Vienna, the University of Cambridge, New York Academy of Sciences, and Arecibo Observatory, was awarded first prize for a professional documentary at the Raw Science Film Festival. Millsapps has spoken about the need for diversity in space exploration at several Mars Society Conventions, at the U.N. “Space for Women” expert meeting, and at “SETI Talks.” Recently she was appointed as a “citizen diplomat” for the U.S. State Department’s American Film Showcase. She holds a Ph.D. in rhetoric and discourse, an M.A. in English and Film Studies, a B.A. in Creative Arts, and an academic certificate in cosmology.

1. My documentary, Madame Mars: Women and the Quest for Worlds Beyond, has been selected for the U.S. State Department’s American Film Showcase (AFS) and I have been named a “citizen diplomat” for its 2020-2021 media cultural exchange program that aims to foster international understanding, dialogue and debate. My participation in this program will enable me to promote the importance of STEM/STEAM education to audiences worldwide, using the issues raised in the film as a way to initiate the conversation. I intend to seek additional opportunities wherever I am invited, where I can make focused presentations, speak informally to groups of girls and women, and consult with the science/tech communities in those locations.

2. The ongoing educational outreach for the Madame Mars project includes a globally distributed e-newsletter in which I write and publish news about women and space, and about STEM/STEAM education. In most editions, I feature an in-depth interview with a woman whose work in the space industry is making news. Past interviews include Kayva Manyapu’s self-cleaning spacesuit, Silje Wolff’s portable greenhouse for growing fresh food on the ISS, and research by bioengineers Susanna Rosi and Karen Krukowski suggesting female mice fare better than male mice when exposed to radiation.

3. My new documentary (now in pre-production), the Otherworldliness Project, features stories about how all of us are taking steps to leave our home planet, including innovative ways to use technology to make space exploration more inclusive.