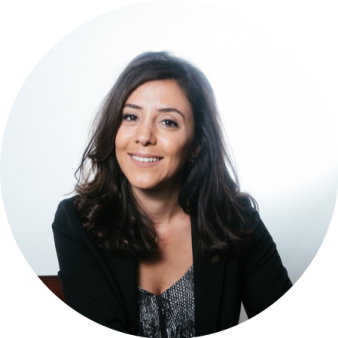 Profile:     Dr Ghina Halabi is an astrophysicist and social entrepreneur leading entrepreneurship programmes at Cambridge Judge Business School. Previously, she was a research scientist at the Institute of Astronomy and Junior Research Fellow at Wolfson College, University of Cambridge. Ghina is the first person to get a PhD in astrophysics from a Lebanese university, the American University of Beirut, where she worked as lecturer before moving to Cambridge.

Ghina is Founder and Executive Director of She Speaks Science, a global multilingual enterprise that aims to build a positive STEM identity among the youth, and promote women and minority scientists with storytelling and mentorship. She also sits on the advisory board for Public Engagement at Cambridge University.

Ghina consults and leads training workshops on academic and business storytelling, and is a physical theatre practitioner. She is a public speaker at international conferences and global forums including UN Women, UNOOSA and TEDx and is featured in mainstream media including BBC Future and various podcasts. [www.ghina.co.uk]

Network Activities:     She Speaks Science has a global footprint, reaching readers in more than 130 countries across 6 continents. Our monthly publication, Scheherazade, is an online story weaved by one of our global storytellers about their STEM research and offered in 5 languages English, Spanish, Italian, Arabic and German. Our programme PENTA is a two-way mentorship model where each member mentors and gets mentored in an interactive one-to-one environment. The 2021 cohort hails from 24 different countries, from Malaysia to Mexico.

Partnerships: During the pandemic, She Speaks Science has expanded its activities and now offers a printed magazine in partnership with Cambridge Science Centre. The monthly magazine is distributed to children in under-priviliged areas in the UK with the help of food banks and charities and it includes a series of stories and activities for children aged 7-12.

She Speaks Science also partnered with SpaceEU, a Horizon2020 project, to inspire Arab children and refugees and educate them on space.

I have also delivered workshops and public talks in Lebanon (Dec 2019). I visited schools in Barouk, my hometown, and talked to ~100 children about astrophysics & space. These communities tend to be conservative and religious. One of the interesting conversations was around the notions "God created us" versus "we're made of star stuff". Another notion I tried to debunk is that astrology is science and astrologers are proper scientists. A questionnaire I ran before the session also exposed a bias that a scientist is a middle aged white man. That perspective shifted after the talk.

Mentorship: I am currently mentoring female students in the UK (graduates and undergraduates) and in Lebanon, including a university undergraduate studying computer science and a school student who says: “I used to hear a lot of things like: Physics is not a 'girly' major… You won't find a job. One day on my Facebook feed and I saw a post about [Ghina] and [her] achievements. My eyes twinkled as I felt that this is the woman I want to become. I want to do a PhD in Quantum mechanics to solve its mysteries.”

UNOOSA Expert Meeting: Making Space4Women in the Decade of Action | 2021